On Saturday I went over to DC's first legal distillery since prohibition, New Columbia Distillery. The distillery is operated by Michael and John, a father-in-law and son-in-law team.  I arrived around 10 a.m. and the guys already had the still going.  Right now they are only making gin, and though none is available yet. They are experimenting with their still and making sure they get the flavor profile they want.  Michael and John welcomed me and and gave me a quick run down of the operation.  They are mashing on Mondays and Tuesdays; they're currently using wheat as their grain for the gin.  Fermentation takes 5 or 6 days and if I understood correctly, they run the beer through the still twice to get it to proof, add botanicals and water and run it one last time.  It's a time and labor intensive process, but I got to put my finger in the still's output and I can tell you that the gin tasted pretty damn good.*

They've got a 450 liter still with two columns they can turn off and on.  One of the columns has 10 adjustable plates, which allows them to get the proof up high enough to make gin.  They've got two fermentation tanks as well as a mash tank.  It's a small operation, but it looks like it is set up for efficiency.

Michael and John have plans for a Maryland style rye in the future, but as is the case with a lot craft distilleries, they're gonna keep the rent paid with their gin.  Both guys are legitimate gin "guys."  They aren't making it simply to get some revenue--though that's part of it--they both drink gin regularly and have a sense of what they want the gin to taste like.  I liked how they  joked about vodka and how boring it is--I suggested they could copy Van Gogh and  make a PB&J flavored vodka.  We all chuckled.  You know, cause vodka's bullshit.

I spent a little over an hour with the guys and I helped them bottle a test batch of the gin.  Bottling is a time intensive process, especially with just three guys.  You gotta put the labels on, fill the bottle, then cork it, and finish it by writing the proof and batch number on the bottle.  When you see one of these bottles on the shelf, you'll know that it was bottled with care by hand.  I think we did 6 or 8 cases of gin.

I'm excited to see what Michael and John come up with. I'm even more excited to taste the forthcoming rye. If you're in the DC area, look for this one on the shelves soon.

* I don't drink very much gin so YMMV.

Rock Hill Farms is, in my opinion, one of the most under-rated bourbons in bourbon. It is a Buffalo Trace product that is packaged, quite possibly, in the most attractive bottle on the market.  The bottling is so cool looking, I have a sense that it actually turns prospective buyers off as they don't want to be the guy who bought a bottle just because it was pretty.  I'm not sure why I bought my first bottle, but packaging aside, this is one damn good bourbon. 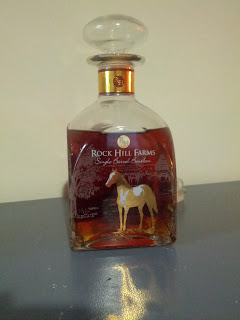 Nose: I get a lot of rye forward spices.  Some cinnamon and brown sugar come through.  There's a little corn underneath there, but I get the feeling someone with a hound dog nose could sniff at this for hours.

Taste: Every time I take my first sip of RHF, I just go "uuuummmmmm." It is thick, oily and layered. It has a nice buttery mouth feel, like you are eating sugar cookie dough.  There is some cinnamon in there as well as brown sugar and a bunch of other spices that sophisticated palettes (not mine) could pick out easily.  For 100 proof this bad boy is just buttah on the tongue.  There's no heat here.

Finish: The finish lingers in one of the most pleasant ways possible.  You are not obliged to take another sip for several minutes because this guy hangs around.

Overall I rate this one out at 92.  Get over your embarrassment at buying the pretty bottle and buy it.  It is about $50 in my area, but it is worth every penny.
Posted by Keith at 6:45 PM No comments:

A Love Letter to Four Roses

It saddens me that I have to start this letter with a confession: When I first tried Four Roses three years ago, I didn't like it.  I thought it was too flowery, too mild and mellow. I was wholly and tragically wrong.

You see, I simply didn't recognize the greatness in my glass.  I didn't recognize the earnestness in which you treat your craft.  Maybe it's your ten different recipes or maybe it is how serious you take your yeasts.  It could be your fantastic private barrel program or the all around awesomeness of your products.  But here's the deal: I love Four Roses bourbon. 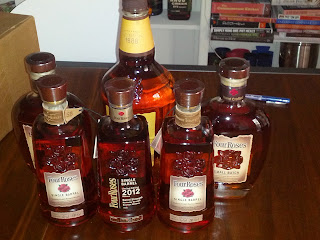 My favorite Four Roses bourbon is the one in my hand.  The Yellow Label is smooth and drinkable in the extreme.  The Small Batch is more complex, but so good I struggle to keep it on my shelf.  If I could only have one more bottle of bourbon in my entire life, I'd pick the 2012 Four Roses Single Barrel Limited Edition.

Our little bourbon committee is doing a blind Four Roses tasting next month.  You're welcome to attend, of course, but we know you're a busy guy.  I just wanted you to know you have fans.

Keith Boyea
Capitol Bourbon Committee
Posted by Keith at 10:11 AM No comments:

Old Grand-Dad 114 is a favorite of bourbon enthusiasts.  It comes from Jim Beam, but it is a high rye mash bill--the same one that produces Basil Hayden's.  The big difference between these two bourbons is that OGD 114 is younger and a heck of a lot cheaper.  Basil Hayden's is typically in the $40 range and OGD 114 can be had for a little over $20.  OGD 114 was one of the Committee's August picks.  I've had several bottles of this guy and I have really enjoyed it in the past.

Nose: Cinnamon spice, very rye forward--so much so that this could pass for a straight rye. I get some grassy-ness and a hint of mint.  After I put a small amount of water in it, some sweeter notes came through.

Taste: A blast of spice on entry with a full bodied mouth feel.  It's hot though, so I added some water.  There's loads of spice in this bourbon and the small amount of water helped bring them out and cool off the heat.  The water really brings out some pleasant sweetness I did not detect initially.

Finish: It burned going down a little on the first sip but after adding water this guy played a little nice.  I got some nice  leftover pin pricks on my tongue that lingered a good while.

Overall I recommend adding an ice cube or a drop or two of water to round this guy out.  I rate this an 85, and at about $22, it is a heck of a deal.  Here are a couple reviews from friends of the Committee.
Posted by Keith at 7:38 PM No comments:

Our first Committee purchase consisted of three bourbons: W.H. Harrison Governor's Reserve Barrel Proof;  W.L. Weller 12 Year; and Breckenridge Bourbon Whiskey. I'll talk a little bit about what I know about the bourbons and then get into our tasting notes.

W.H. Harrison Governor's Reserve Barrel Proof
Like a lot of craft distillers, W.H. Harrison claims to be the "First Bourbon from State X Since Prohibition."  In this case, the state in question is Indiana.  Based on the website and the rumblings on the bourbon message boards, this is probably a sourced bourbon from what used to be known as Lawrenceburg Distillers Indiana (LDI).  I can't tell from the website if there is any distilling being done at the W.H. Harrison site.  This bourbon is a high-rye recipe (probably around 30-35% rye) and it is bottled at barrel strength (115 proof).  It is about 4 years old and it cost us $54.99 from The Party Source.

W.L Weller 12 Year
W.L. Weller is an iconic bourbon brand.  It is one of the few easy to find, high quality wheated bourbons on the market.  This version is 12 year old, 90 proof, and at under $30, one hell of a deal.  Weller comes from the Buffalo Trace distillery and it has long been a favorite of bourbon enthusiasts.

Breckenridge Bourbon Whiskey
Breckenridge hails from Breckenridge, Colorado and unlike Harrison, they are making this juice on site in their 700 gallon still.  This product is about 3 years old and is bottled at 86 proof.  It's a bit pricey for a lower proof bourbon--$44.99 from The Party Source.  Like the Harrison, it is a high-rye recipe at 38% green rye.  I'm not sure what green rye is--I've never seen green rye mentioned in bourbon making.

Harrison: Gulliver called it "super-meh" though I thought this was quite good.  Spicy and minty with a pleasing heat.  Unfortunately I spilled almost my entire allotment of Harrison so formal tasting notes were not completed.

W.L Weller 12 Year: Corn forward sweetness with some typical-for-wheaters vanilla on the nose.  Viscous on the tongue like the other Weller expressions.  Pleasant and sweet with a nice spice balance.  Vanilla heavy on entry and a slimy (in a good way) mouth feel.  Close to being great.

Overall I thought the Weller was consistent with the other Weller expressions--good but not great.  A blind tasting between Weller Antique, Special Reserve and 12 year would yield interesting results.

Breckenridge: Nose--vanilla and caramel with a fruity smell--maybe plum? After this one opened up a bit I smelled mint, evergreen and some Christmas spice.  The taste had a lot mint which can be typical of rye forward bourbons. Also notable was a disappointingly short finish.

Overall this one shows a lot of promise though I was disappointed with the low proof.  I think a cask strength version with a bit more barrel time could produce a really standout bourbon here.  This one was so minty-rye that I would have told you that this was a straight rye if I hadn't already known it was bourbon.  Gulliver thought this one was the standout of the group.

I liked the W.H. Harrison bourbon best of the three, which didn't surprise me since I generally prefer high-proof bourbons because they reflect the taste of the spirit better.  Gulliver and Kyle liked Breckenridge best.

In the summer of 2012, we formed the Capitol Bourbon Committee.  Every month the five of us put in $50 to buy as much bourbon as we can.  I divide up the bottles and pass it out.  Then we exchange notes and ratings.  The idea is to taste as much bourbon as we can so that we can get a handle on what we like and dislike.  It also gives us an excuse to drink more bourbon!

This space gives us an outlet to publish our tasting notes, write about our events, and interact with other bourbon enthusiasts.