Corn whiskey occupies a rather strange, IMO, area of American whiskey. It must be at least 80% corn mash, which would qualify it for bourbon, but it is aged in used cooperage. Bourbon, as you know, must be aged in new white oak. It tends to sell better in the deep south (or so I've been told) and it can be harder to find, even in DC.

Mellow Corn is one of the most popular corn whiskies. It is 100 proof and bottled in bond. I secured this bottle from the Party Source. We all tasted it blind, but it wasn't truly blind for me--I could tell simply by the light color that this was the Mellow Corn (I divide up the whiskey and my patient, lovely wife applies the numbered labels and creates the key). Mellow Corn is super cheap--this bottle, with shipping, cost less than $14. 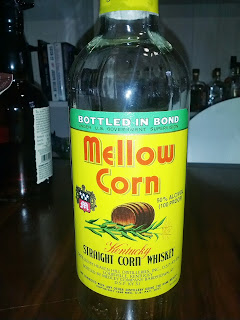 Taste: Popcorn/summer corn, some wood. Kind of an interesting mix.

Finish: A little hot, particularly for 100 proof. Consistent with the taste as far as flavors go.

Overall: 82. A really consistent pour. Doesn't do much, but it is perfectly drinkable.

Taste: first impression was bitter oak with an acridity that was hard to get past; more pleasant with addition of some water; subtle taste of fig.

Finish: lingers on the palate with a warmth and a little bit of honey

Color and nose: This bourbon is a pale goldenrod, much lighter than the others and almost pilsner-colored, giving the impression that it might edge towards thinness. The nose provides corn, brown sugar, vanilla, and raisin. At first whiff, there is not a whole lot going on here.

Taste and Finish: The immediate effect is a healthy dose of corn husk, thin on the tongue but heating as it goes along. The brown sugar and vanilla from the nose have coalesced during the taste into the oak from whence they came. The alcohol, benign at first, really heats from the back of the mouth to the front as the finish gains momentum. The finish is heavy on charcoal with plenty of the corn husk for good measure.


Overall: This whiskey gets a solid meh.  It seems to be an elements bourbon, no frills and all the bases covered with just enough burn to remind you you’re drinking booze. It’s perfectly fine.

Taste: Spicy with some nutmeg

Nose:  Not much to note.  Fairly weak.  A slight burn upon sticking my nose right in it and taking a big whiff.

Taste:  Starts fairly nondescript but pleasant enough.  Somewhat thin and easy going down, but again a bit of a burn on the back end.  Ending with a strange and funky flavor.


Overall:  Drinkable enough but not a bourbon I would return to often.  75

Final comments: The scores were fairly tightly bunched. High of 83 and a low of 75. The jury is in on this one--it is drinkable but it isn't going to blow your socks off. For $9.99 (if you can find it on a shelf), it really isn't much of a risk.
Posted by Keith at 6:41 PM No comments: