Note: Wheater Wednesday is a result of a massive blind wheated bourbon tasting that recently concluded. The bourbons rated here are publicly available. 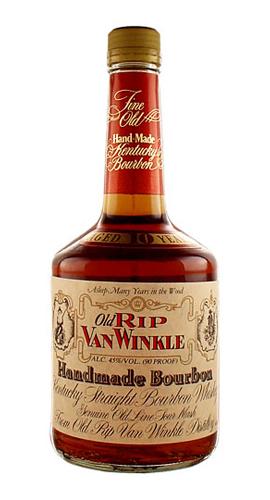 Next up is Old Rip Van Winkle 10 Year 90 proof, often abbreviated ORVW 10/90.  ORVW 10/90 is part of the most sought after bourbon family in the bourbon world: Pappy Van Winkles.  Pappy Van Winkle makes extraordinarily good bourbon, but if you're a bourbon drinker, you already know all this.  ORVW 10/90 is one of the lesser known offerings.  It is a close cousin to a bottle I try to keep on my shelf, ORVW 10/107.  The Van Winkle lineup also includes a 12, 15, 20, and 23 year old bourbons, and a 12 year old rye.  The Van Winkles have released various other products over the years, but my basic rule of thumb has always been that if I see any Van Winkle offering on the shelf, I purchase it.  That is, until now...

I had not had ORVW 10/90 until this tasting.  Remember, I tasted all these bourbons blind.  On to the notes:

Nose: Young and corn forward, some vanilla and corn stalk.

Taste: Like bourbon flavored water.  There's not much to this bourbon.  Thin and watery.  I wouldn't have even thought this was a wheater cause there is almost no sweetness.

Finish: A slight tingle on the back of the tongue.

Overall: 78.  When I found out the identity of this bourbon I was mildly shocked.  I've always like ORVW 10/107, but then again, I've always known what was in my glass.

Sour Mash Manifesto (Put SMM in your reader. Jason Pyle is one of the best bourbon bloggers around.)

Whiskey Apostle
Posted by Keith at 10:00 AM