The Best Delivery is a Bourbon Delivery

Several months ago I purchased a bottle of Jefferson's Presidential Select 18 Year Old Bourbon.  The bourbon is notable because it is purportedly Stitzel-Weller bourbon.  S-W is a legendary distillery among bourbon geeks, as it was the distillery that until recently produced bourbon for the Van Winkle family.  (Van Winkle is now made at Buffalo Trace, and don't get bourbon enthusiasts started on the switch over. You'll get more than you bargained for.) 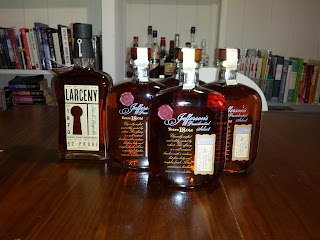 Anyhow, when I first tasted JPS18, I didn't like it.  In fact, I hated it.  Since I didn't like it, it sat on my shelf, untouched, for several months.  At some point, I gave it another shot, and the bourbon had changed.  After some time it opened up and I really really enjoyed it.  At some point, Gulliver came over and we shared a pour or five of it.  Gulliver liked it enough to purchase his own bottle.

Until very recently, I hadn't really thought about it.  But as part of another bourbon group, I'm taking part in a  21 wheated bourbon blind tasting.  Two bourbons are revealed weekly.  Long story short, I rated JPS18 a 95, which is the highest I've ever rated a bourbon.  At the same time, Gulliver commented to me how much he enjoyed this bourbon.

I try to keep an eye out on area and online liquor stores to keep a pulse on prices.  In the DC area, I've seen JPS18 go for as much as $105, so when I saw it online for $69.99, I knew I had to jump on it.  I emailed the group and Kyle and Gulliver were both interested in getting a bottle (In Gulliver's case, two).  Today, the bourbon arrived, and man is it a pretty sight.

The other bottle along side the 4 JPS18s is Larceny from Heaven Hills.  It is a new brand that came out in the last few months but has not yet arrived in DC.  I'll have notes on it when I get around to opening it.  For now, though, the Committee is going to enjoy some JPS18.
Posted by Keith at 6:41 PM