Note: Wheater Wednesday is a result of a massive blind wheated bourbon tasting that recently concluded.  All bourbons here are publicly available. 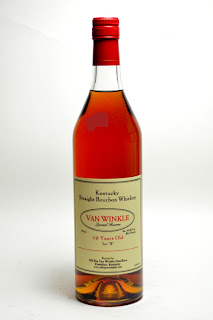 Van Winkle is quickly becoming the most famous name in bourbon--or at least the most sought after.  (As any whiskey blogger can tell you, writing about Pappy Van Winkle is a quick way to boost your traffic stats.)  The "Lot B" version is a 12 year old whiskey bottled at 90.4 proof.  Two years ago I received a bottle as a gift, but since then (and that bottle is LONG gone) I've not been able to find any at a reasonable price.

Remember that the big wheater tasting was blind, so I did not know what I was tasting.  Here are the details:

Nose: Caramel, some vanilla and barrel char.  Some richness here.

Taste: Disappointingly thin and watery.  Doesn't live up to the nose. Musty, not a whole lot stood out here for me. Some nice sweetness but it is in the background.  Okay, but unremarkable.

Finish: Mild spice, but rather short.

Overall: I scored this an 80.  I think this is perfect example of something being overrated because if its name. It's not bad, but there's better wheaters out there and they're almost all easier to find.
Posted by Keith at 10:40 AM